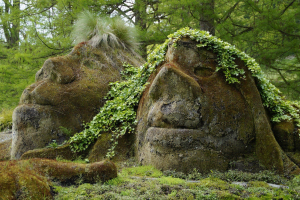 N.B. this show has been cancelled

The folktales of the Mabinogion are some of the oldest and strangest in the literature of the British Isles, telling the mystical stories of ancient Wales; in this world, children have been known to turn into fish, and a wizardly mouse may well cast a spell on you. Mabinogion follows the birth and life of King Pryderi - whose name translates to modern-day English as 'Anxiety' - as he contends with mysterious deerlike visitors from the Otherworld, battling the undead armies of the Irish, and a rather heated argument with a neighbour over a herd of pigs. This show reimagines the four branches of the Mabinogi for a present day audience, and our merry troupe of performers will be using song, puppetry, and comedy to sift through the surreal stories of Pryderi of Dyfed and present them in fantastical ways such as you've never seen the likes of before. From the minds behind Fables for Robots ('a space of vibrancy and innovation... a performance that is genuinely refreshing' - The Cambridge Student, ****).