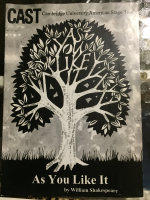 'Come woo me, woo me, for now I am in holiday humour and like enough to consent.'

Following a 3 week tour of the United States, CAST returns to Cambridge with Shakespeare's comedy, 'As You Like It'. A colourful feast of music, clowning, cross-dressing and country wenches this promises to be a fantastic start to the new year at Cambridge and a great way to see the newly refurbished ADC.

All information for this Camdram Entry (excluding the description above) was added by the CAST 2018 Tour Managers and is based on an archived programme. However, this actual Camdram entry was created at the time of the original show. It is also worth noting that the exact dates/times of the performances listed are not known. However, the venue order is correct.
If you have any more information regarding this show or would like to know more, please get in touch.