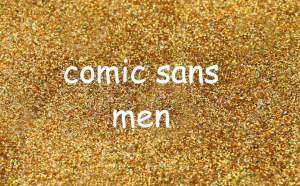 Comic Sans Men is bringing a brand-new comedy hour to the ADC stage, without a script or a man in sight. Our stellar female and non-binary performers will improvise entirely new scenes before your eyes - think sketches, monologues, and your favourite improv games - all based on your suggestions.

Roman used to think that women couldn’t be funny. Roman doubted that comedy could be made up on the spot. Silly Roman. Now the time’s new, Roman.