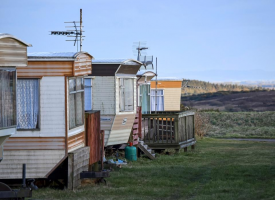 ‘One family, one ‘ouse, one caravan’

In a Caravan park in a Welsh seaside town lives fifteen year old Kim. One rainy afternoon in October 1994 a mint-choc-chip ice cream and an encounter with twenty year old Mick changes her life forever.

Kim’s older sister Kelly falls for the same man, thus beginning a complex web of entanglement which threatens the very foundations of their family.

Set over the course of two years ‘Caravan’ follows the quiet chaos and collapse of this increasingly clashing family. As the claustrophobic caravan becomes more and more cramped, the secret of what happened on that Autumn afternoon in 1994 threatens to pull apart the fragile hinges upon which the Caravan and the family are built.

Winner of the 1998 George Devine Award, ‘Caravan’ is harrowing and hilarious in equal measure. Blakeman offers a pinhole look into an ordinary life, marred by hardship.