Blame Not Our Author
By Anon. 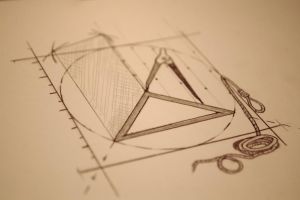 Enter into the world of a Euclidean textbook in the early seventeenth century, where a melancholic young square named Quadro dreams of becoming the perfect circle. Meanwhile, his dastardly friend, the base Rectangulus, decides to seek revenge on the entire shape-world, turning Quadro, Line and Circulus against their weary sovereign, the Compass. Geometric chaos ensues, as the characters in an overused textbook are finally given the chance to rebel against their lot in life.

Transcribed and published by the Malone Society in 1983, ‘Blame Not Our Author’ has not been performed since it was penned in the Jesuit English College in Rome circa 1630. Written for students some 400 years ago, it is packed with visual gags that are farcical, witty, and still eloquent to anyone familiar with school geometry lessons.