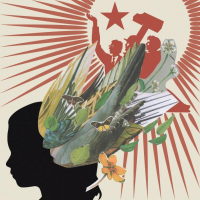 For 13-year-old Maklena, the Soviet Union is the best fairy tale yet. She imagines life in ‘the land of the Soviets’ and dreams of joining the revolution.

Her landlord Zbrozhek has a different ambition: to buy the local factory and see his name in golden letters.

When their dreams are put on the line, reality and fantasy become confused and communist and capitalist ideals are taken to the extreme.

This will be the world premiere of the English translation of Kulish’s masterpiece - written just before his execution by the Soviet authorities.