The Satyricon
By Gaius Petronius (adapted by Elliott Wright) 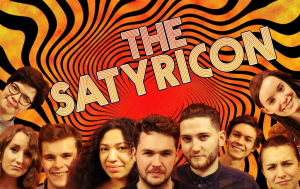 63 AD.
Nero’s Rome.
The city is in turmoil under the rule of a dangerous tyrant, but Encolpius is more worried about the fact he can't get it up. Join him and his fellow reprobates as they drink, argue and shag their way across Italy in a journey that will take them all the way from the brothel houses of Puteoli to the sex-mad cult at Croton, enduring along the way shipwrecks, terrible poets and the grotesque company of the obscene noveau riche Trimalchio.

Adapted from the ‘Roman Novel’ of Petronius, The Satyricon will be a dark and scandalous journey through the twisted decadence of the Roman Empire, and a riotous piece of immersive theatre.

Presented in association with the Cambridge University Classics Society.