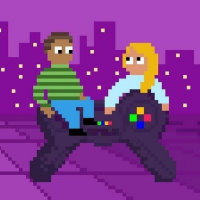 "Drifting Towers is a noughties’ adventure video game set in a bleak futuristic cityscape. It was discontinued shortly after release for being too difficult. Reddit users called it ‘dense but ambitious’.

Best friends Sam and Tobi have been playing the game for 8 years, and they’re nearly at the last level; but while Sam wants to keep playing to the end, real life doesn’t wait for them to finish.

Tobi is moving away, and things will never be the same. The real world slowly bleeds into the absurd adventure of the game - in both worlds, all Sam wants is not to be left behind."

A new comic devised play about friendship, moving on and mashing the square button til your problems go away. From the people who brought you 'Spiders', 'Conviction', 'The Arm in the Cat Flap', 'Stormface', 'Footlights Presents: Pen Pals', 'Baby Steps', 'Welcome to Little Heswing' and more.