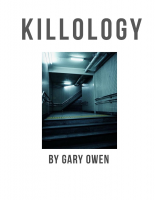 there is an instinctive revulsion against taking a human life

and that revulsion lies in our hearts

and that revulsion can be conquered

video game designer paul has created ‘Killology’ - a game where players are rewarded if they kill their opponents in the most tortuous and creative way possible.

when teenager Davey gets brutally murdered in ways not dissimilar to those in the game, who’s to blame?

first performed at the royal court in 2017 to rave reviews, killology is a visceral and harrowing piece of new writing