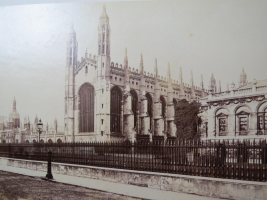 Porterhouse College prides itself on having remained exactly the same for over 500 years. Swan is served in hall, the rowers are head of the river, and no one has achieved a first since 1956.
Disaster strikes when a liberal politician is appointed as the new master. Sir Godber plots to introduce a self-service canteen in hall, a condom machine in the toilet, and most horrendously of all… female undergraduates!
Porterhouse’s incurably traditional porter Skullion and the aging dinosaurs on the college council simply will not stand for it. This war for Porterhouse’s soul can only end one way: with three deaths, an incriminating television documentary and 2,000 inflated condoms raining down on Old Court.
Welcome to Porterhouse College, Cambridge.

Porter at the Piano – Michael Cullen