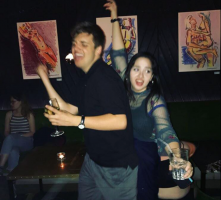 Bella and Will shot to fame in the noughties after they won smash-hit TV show ‘DUETS!’. But a decade on, Bella’s losing her voice, Will’s losing his religion, and neither of them can lose those extra pounds. Under the mysterious threat of an anonymous text, can they prove that they’ve still got it?

‘Reverse Cowgirl’ is a comedy about a pop-star double-act who have lost everything but each other. With nothing left but pride, can they take back the reins?