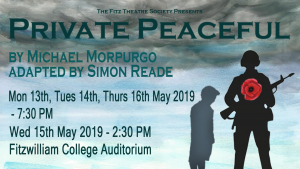 Private Peaceful tells the story of Tommo Peaceful's idyllic childhood, growing up in the countryside with his older brothers at the beginning of the 20th century. Aged 16, Tommo lies about his age so he can follow his brother Charlie to go to Belgium and fight to defend his country. This is a story of innocence that perseveres through tragedy, until the indiscriminate brutality of trench warfare puts a premature end to childhood.