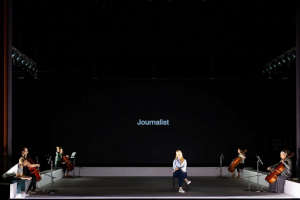 Denis & Katya follows accounts of the true story of two 15-year-old Russian teenagers Denis Muravyov and Katya Vlasova. Their story was reported worldwide in November 2016 after they ran away from home together and hid in a family-owned hunting cabin in Strugi Krasnye. After a few days, the police surrounded the house, the situation escalated and the pair died of gunshot wounds on November 16, 2016. Other circumstances of their death are unclear. They live-broadcast on social media frequently during the three days in the cabin, engaging with on-line viewers as they filmed while in the midst of a standoff with Russian Special Forces.