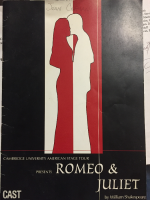 The Camdram entry for this show has been added retrospectively by the CAST 2018 Tour Managers.
All information is based on an archived programme.
If you have any more information regarding this show or would like to know more, please get in touch.