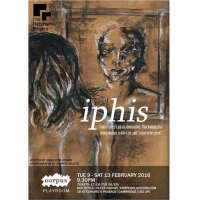 ‘I don’t care if I am an abomination. That woman, that wrong woman, is who I am, and I refuse to be cured.’

This claustrophobic, bittersweet twist on a story from Ovid's Metamorphoses turns the romance of Iphis and Ianthe into a tragedy. The heroine, Iphis, having been transformed into a man by the goddess Isis in order to solve the ‘problem’ of her homosexuality, suffers an identity crisis. Her mother Telethusa and new wife Ianthe struggle to cope with her depression and anger, which threaten to turn into radical action against her misogynistic father, Isis and society itself.

This bleak yet hopeful student-written play challenges prevailing ideas that our identities are not our own. In our world of increasingly fluid sexuality and gender roles, 'Iphis' raises the question – does mankind ever progress beyond its prejudices?