White Guy On The Bus
By Bruce Graham 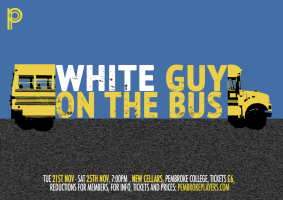 Set in present day Philadelphia, White Guy on the Bus follows the life of a wealthy white businessman Ray who rides the same bus week after week, eventually befriending a single African American woman. What initially appears to be friendly rapport between unlikely acquaintances soon turns into an uncomfortable business proposition. As Ray’s alternative motives are revealed, it becomes clear that this is definitely not a play about mutually beneficial relationships formed across social and racial divides, but one revealing the hard truths about the latent racism that characterises much of American life today.