Thrill Me: the Leopold and Loeb Story
By Stephen Dolginoff 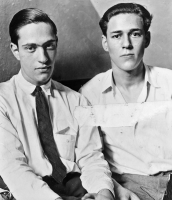 "But you've asked a simple question, and I've told you why. It wasn't on a dare or on a whim. It's hard to comprehend now that the reason why, was simply that I went along with him."

Relationships can be murder. In 1924, two wealthy Chicago University students abducted and murdered a young boy for no reason other than wanting to carry out ‘the perfect crime’. Thirty-four years later, the true motives were revealed. Stephen Dolginoff’s one-act musical brings real-life thrill killers and homosexual lovers Nathan Leopold and Richard Loeb to centre stage. It focuses on their dysfunctional romantic relationship, and how it eventually led to their imprisonment for ‘the crime of the century’. With a fast-paced narrative and captivating score, Thrill Me tells a story of obsession, sex and misguided philosophy.