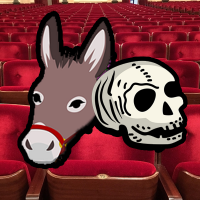 N.B. this show has been cancelled

The House Is Now Open is a student-written comedy play focusing on Endre, a chaotic fresher who accidentally commits to two shows on the same night. Written by two third years who've experienced their fair share of unfortunate theatrical mishaps, this play within a play exposes once and for all the true meaning behind the phrase, 'the show must go on'.

4 days until the dissertation deadline. 3 hours of sleep. 2 shows on the same night…

and 1 over-committed student actor, who has somehow ended up in both.

Overwhelmed by the stresses of uni life, Endre discovers that the two plays he’s been rehearsing for are happening on the same night. At the same time.

The house is now open….

Determined not to let his friends down, Endre finds himself running between both shows, juggling the jetés of Shakespearian dialogue alongside the iambs of contemporary dance.
As tensions rise, Endre takes the ‘quick change’ to a whole new level, and hopes no one becomes suspicious of his unusually long toilet breaks.

Will he pull it off? Will his fellow cast mates manage the mishaps of opening night on their own? Will he miss that all important cue line?

All the world’s a stage, but this player needs a break!