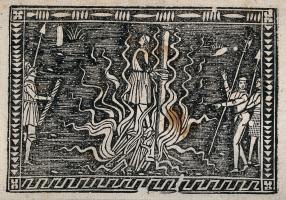 Saint Joan is, ultimately, the story of an innocent teenager who was burnt at the stake. It begins as a farce and it ends a heart-breaking tragedy. Joan of Arc was seventeen when, inspired by heavenly visions, she convinced the King of France to let her ride into battle with his armies. She was eighteen when she led her soldiers to incredible victories at Orleans and Rheims. And she was nineteen when she was sentenced to death as a witch. What is so terrifying about Bernard Shaw’s retelling of this extraordinary life is the sense that, however different their clothes might be, the people involved in the tragedy are the same people that exist today - Joan was killed by a world of bureaucracy, self-deceit and resistance to change that belongs as much to our time as to hers.

In a radically edited version of this classic play, our production hopes to exploit the full potential of the Union Chamber, creating a medieval world with strange and haunting parallels to the present. The tickets will be available to both Union members and non-members so it will be a great opportunity to see the space if you haven't had the chance already!