Teahouse
By Lao She 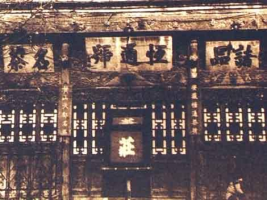 We invite you to come and traverse the turbulent history of early twentieth-century China in the first ever English performance of China's most famous play.

Teahouse is the revolutionary tale of the Chinese revolution: the fall of a dynasty, the establishment of the republic, and bloody civil war between the Nationalists and the Communists.

Follow history as told from within the iconic Beijing 'Yu Tai' teahouse between 1898 and 1948 as it struggles to survive in turbulent times. In its lifetime China transforms: it is a dying Qing empire overrun by foreign aggressors and rampant with human trafficking; a republic devastated by anarchy; a state saturated with oppression and corruption.

Is the hope of a new tomorrow real, or is it only an illusion crushed again and again under the wheels of history? Teahouse showcases Lao She's brilliant social and cultural commentary through a three dimensional depiction of the common and the grotesque, an international classic that remains eerily relevant today.