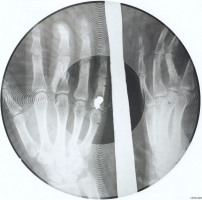 Against the backdrop of the high-point of Cold War tensions, the Kremlin banned the production, sale, and distribution of subversive or western music – particularly jazz. To gain access to forbidden music underground gangs would raid bins outside hospitals to steal discarded x-rays, and crudely turn this medical grade vinyl into disposable records written on bone. Soon they found themselves embroiled in a semi-official gang war with the authorities, risking imprisonment in the gulag (or worse) for their resistance.

In the style of gig-theatre, RIBS combines the atmosphere and live music of a gig with the storytelling of theatre to create an immersive and all-consuming experience.