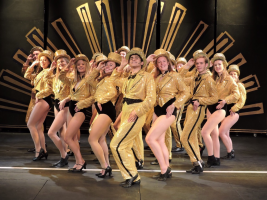 With its blend of powerful vocals, high-energy choreography, and amusing and poignant vignettes, A Chorus Line is a stunning musical celebrating the talented and dedicated performers of the Broadway chorus. The show depicts the final gruelling round of auditions for a new Broadway musical, and for seventeen dancers, this is the life-changing opportunity they have worked towards for their entire career. A Chorus Line is a powerful metaphor for human ambition, revealing the truth of the glamorous yet competitive world of show-business, and what happens when you put everything on the line in pursuit of a dream. Marvin Hamlisch’s iconic score features such classics as What I Did for Love, The Music and the Mirror, and the spectacular finale: One (Singular Sensation). Based on true stories of the struggles of performers wanting to make it big on the Broadway stage, A Chorus Line has become an instantly recognisable classic, with the original production winning no fewer than nine Tony Awards.

This production of A Chorus Line enjoyed an unprecedented sell-out run of six performances at the ADC Theatre between Tuesday 30th October and Saturday 3rd November 2019.