The Mighty Players and The Shadwell Society present... 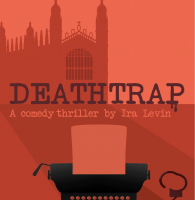 Sidney Bruhl, an academic and struggling playwright, has writer's block. That is until he reads Deathtrap, a tour-de-force murder mystery laden with plot twists, psychological horror and emotional intensity. It’s just a shame that an unproven upstart wrote the masterpiece – but what if there was a way Sidney could make it his own? Time to invite the playwright round for tea…

Deathtrap, arguably Ira Levin's greatest play, still holds the record for the longest-running comedy-thriller on Broadway, consistently staggering audiences for decades. Now, brought to life at the ADC Theatre, Deathtrap promises an all-too-real comedy-thriller that hits like no other.

"I'd like to beat the wretch over the head with the mace there, bury him in a four-hundred-pound hole somewhere, and send the thing off under my own name."