Kiss Me, Kate!
By Bella and Samuel Spewack, Cole Porter 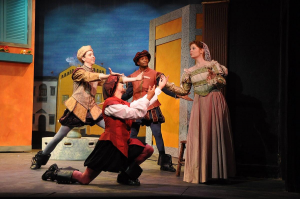 Kiss me, Kate is a joyfully jazzy musical set in Baltimore in 1948, in a theatre company who happen to be putting on Shakespeare’s Taming of the Shrew, whilst a similar story unfolds among the cast and crew. Egotistical leading man, director, and producer Fred Graham is forced to work alongside his ex-wife, Lilli Vanessi, playing opposite one another in a new production of Shakespeare's Taming of the Shrew. As the two bicker and fight, it becomes clear that they are, in fact, still in love. Throw comedy, big band jazz and dance into the mix and you'll get somewhere close to Kiss Me, Kate. This wonderful show includes the hits Brush Up Your Shakespeare, Too Darn Hot and Another Op’nin, Another Show, as well as lesser known gems such as I Hate Men and Tom, Dick or Harry.

Get involved with Kiss Me, Kate!:

Kiss Me, Kate! will be holding auditions on 28th, 29th, 30th November and 2nd December. Slots for these will be released on Sunday 27th!