HMS Pinafore at the Minack
By W.S. Gilbert; Arthur Sullivan 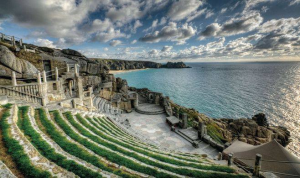 All aboard! But all is not ship-shape on the HMS Pinafore...

Josephine, the captain's daughter, is set to marry the eccentric Sir Joseph Porter, First Lord of the Admiralty, but she is deeply in love with Ralph Rackstraw, a lowly sailor. With the help of Ralph's fellow sailors and Sir Joseph's sisters, cousins, and aunts, the couple plan to elope, but will love conquer the barriers of wealth and class?

HMS Pinafore is one of Gilbert and Sullivan's slickest and most popular comic operettas. With some unforgettable tunes, colourful characters, and timeless mockery of social class, patriotism, and party politics, there is every reason to get involved!

One of the highlights of the Cambridge theatre calendar, the Minack show brings together some of Cambridge’s finest technicians, musicians and performers. The production is put together on site as the cast, crew, and orchestra live and work together in the idyllic village of Paul in Cornwall (a short drive from the theatre). The cast will arrive in early September to begin rehearsals, with the orchestra and technicians following a week later.